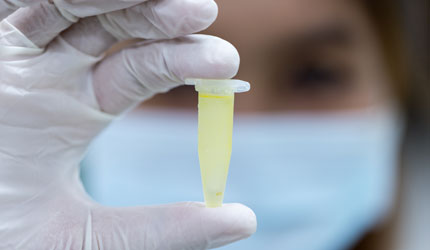 sperm DNA fragmentation in bangalore|fertility problems bangalore - While the routine semen analysis can provide important information about male fertility such as sperm concentration, motility and morphology, it does not reveal any information about the sperm DNA integrity.

This test is an effective method for measuring the DNA fragmentation in thousands of sperm in an ejaculate. It is a completely independent variable. Men with otherwise normal semen analyses may have a high degree of DNA damage.

Recent research has revealed that subtle abnormalities can be found in sperm samples that seem to be normal according to conventional analysis techniques.The DNA in the sperm head is sometimes fragmented, and this may be the reason why couples with a diagnosis of unexplained infertility do not achieve pregnancy. There seems to be a correlation between sperm DNA fragmentation and aneuploidy.

Research also shows that even if a pregnancy is achieved, there is a significantly higher likelihood that it will result in miscarriage. Fifteen percent of men with normal basic semen analysis profiles have been associated with infertility problems. Moreover, about 8% of men with normal sperm results do have abnormal levels of DNA fragmentation in sperm.

DNA damage in spermatozoa affects both mitochondrial and nuclear DNA. Its origin can be explained by six main mechanisms:

Most studies of prognostic factors for pregnancy with intrauterine inseminations (IUI) focus on the motility of the sperm after treatment. A total motile count of 1–2 million sperm cells is usually regarded as a threshold value to obtain a pregnancy in cases of unexplained or mild male infertility

Indications for male patients who may benefit from the Test